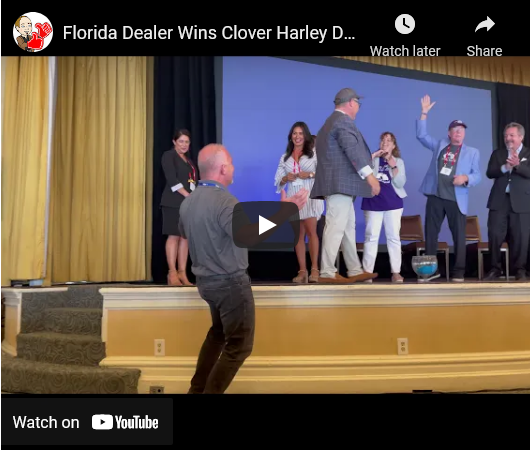 By Andy Slawetsky – Clover imaging donated her 6NS Harley Davidson is being raffled on behalf of The Jillian Fund.

Tickets were sold at industry events such as SDG and others, as well as during the Ride for Jillian, held in early 2021 when Patriots Pack drivers traveled from Arizona to Richmond VA to raise funds and sell raffle tickets for the 2021 Harley Davidson Slim Boy .

On August 19, the raffle took place during the BTA National Conference in the Hotel del Coronado at the end of the two-day event.

This video is part of an ongoing series of What’s Happenin ‘in Person (WHIP) videos available on Industryanalysts.com and here YouTube channel (IATV).

NOTE: We received this email from David Polimeni:

Gentlemen, first let me say how shocked and excited I was to receive the amazing Harley gift at last week’s BTA conference. With that said, I can’t help but think that I won for Jillian’s advantage, not mine.

I am blessed and happy to purchase a Harley for my personal pleasure and as such I feel compelled to keep the give alive.

I intend to “re-auction” the Harley in my local market and donate the proceeds to the Jillian Fund. ~ David Polimeni

Founded in 1996 and headquartered near Chicago, the Clover Imaging Group has grown to become the largest collector and remanufacturer of printer cartridges in the world. With a business model focused on sustainable innovation, Clover’s high quality, environmentally friendly remanufactured cartridges enable companies to lower their printing costs while reducing their environmental footprint.

ARCOA is giving away Clover Harley Davidson raffle tickets during the BTA conference!

How To Save On Ink Cartridges – The Best Tips For 2022

Top 5 Articles from Clover Imaging in 2021

Analysis of Toner Cartridges Market Size in 2021 by Top Companies